Interview with the dragon from Panzer Dragoon 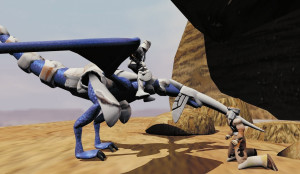 Holy shit, so you guys ain’t gonna believe this but we got a BIG interview comin’ your way. No, we ain’t talkin’ to my bro Mikey (RIP), we’re talkin’ to THE dragon from Panzer Dragoon. You might best know Panzer Dragoon as that sweet mini-game on the Xbox game Orta. Yeah, believe it or not they had a retro version of Orta on the same disc! SEGA Does what… you know the rest. Anyway, let’s begin the interview.

HAHA! Awesome right? He totally talked to us, no foolin’! Alright bros, next week we get high with Big the fuckin’ CAT! ‘Til then, keep on gamin’ and keep on bangin’.